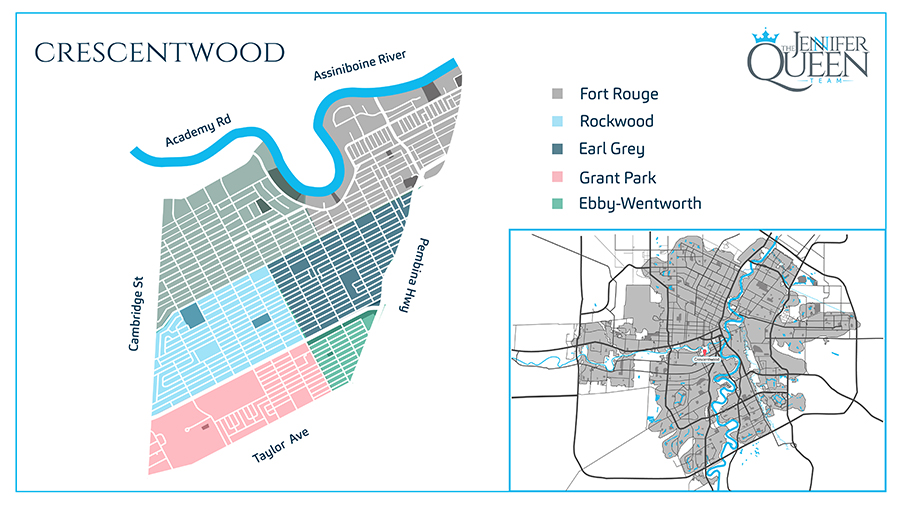 Crescentwood is a mature neighbourhood in the South end of Winnipeg that borders River Heights to the West (dividing line is Cambridge Street) and Pembina to the East. Here you will find homes of all sizes and shapes that are also FULL of character starting with more affordable wartime-era homes that were built from federal government-provided floor plans in the 1940's, to some substantial multi-million dollar properties. Lot sizes in this area can range from as small as 25' wide to fairly substantial to accommodate the aforementioned larger homes.  Most homes in the area are on tree-lined, established streets.  This area is close to Pembina Highway which provides quick access to the Downtown core or to the University of Manitoba. Crescentwood is located approximately 6 kilometers from the Winnipeg James Armstrong Richardson International Airport, approximately 7 kilometers from the University of Manitoba and 4 kilometers from the downtown core.  This area is also a hot spot for medical professionals as it is a quick commute to both learning hospitals in Winnipeg (St. Boniface and Health Sciences Centre).

Crescentwood is a competitive market to buy into. Homes are highly sought-after in this neighbourhood, with price points ranging from the low $200,000 to well over a million for more stately and substantial homes. The average home sells from $320,000 - $360,000 although you can find some fixer-uppers for less. This area offers some attached home options as well as detached homes.  It also offers an abundance of condominium options, with sales prices for the past year ranging from as low as $100,000 all the way up to $1.1 million - now how is that for variety!?

Crescentwood is home to many amenities that include drug stores, grocery, and other amenities.

Crescentwood offers a variety of elementary, middle-school, secondary options in both English and French Immersion.  Crescentwood also plays home to the renowned St. Mary's Academy, a private girl's school teaching grades 7-12.  The area is also a fairly quick bus ride to both the University of Manitoba as well as the University of Winnipeg.

There is no hospital in Crescentwood, but it is a short drive to the Misericordia Health Centre which is found at 99 Cornish Avenue, just over the bridge from the area. It is also a short distance from the Health Sciences Centre, one of Winnipeg's largest hospitals.

Crescentwood has ample shopping offerings. It provides easy access to Pembina Highway, Academy Road, Stafford Street, as well as Corydon Avenue where one can find independent and unique boutique-style stores ranging from food catering to designer clothing and giftware. The area also has Grant Park Mall, which has anchor stores such as Safeway, Shopper’s Drug Mart, Liquor Mart and a Movie Theater.  Along Taylor Avenue, you will find large superstore options including Walmart and Sobeys.

Just beyond the borders of Crescentwood you will find Polo Park Mall.  This large shopping mall has something for everyone, with over 220 stores, some of the more popular include: The Bay, H&M, The Gap/Gap Kids, Sport Chek, and the Apple Store.

Crescentwood is home to one of the most prestigious restaurants in Winnipeg, 529 Wellington. Known as one of the finest steakhouses in Winnipeg, it is highly recommended that you book your reservation well in advance!  If steak isn't your thing, there are plenty other specialty restaurants in the area including high-end pizzerias, sushi bars, Italian options, among others.

Crescentwood is well known for providing easy access to Wellington Crescent, a popular destination for those wanting to take-in the beauty of some of the stateliest homes that Winnipeg has to offer. Wellington Crescent is also closed to traffic on Sundays in the summer, so take advantage and enjoy a stroll!

Crescentwood also plays home to several large recreation spaces as well as the Pan-Am Pool, which is a large indoor swimming facility that was original developed for the Pan-Am Games.  This space offers a fitness facility, running tracks, in addition to three large swimming pools.