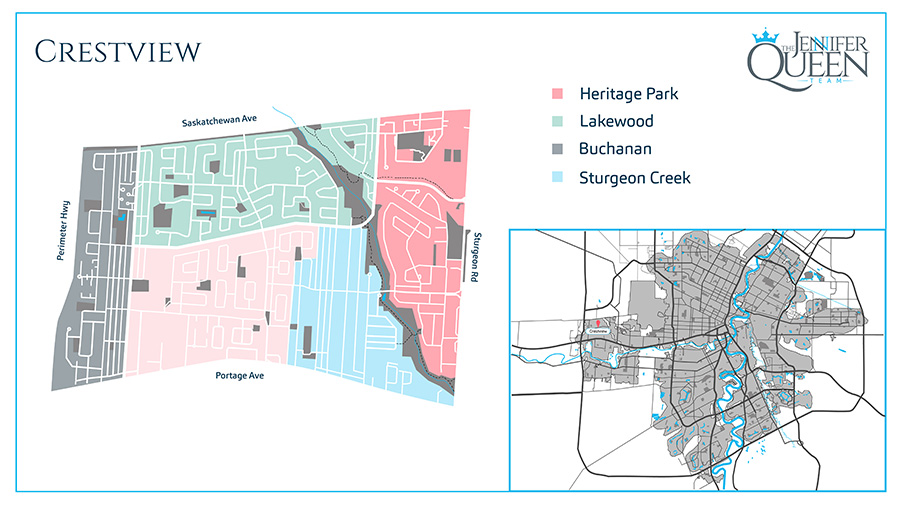 Crestview is located in the far west side of Winnipeg and is part of St James district.  The borders of Crestview are Saskatchewan Ave to the north, Sturgeon Road to the East, Portage Avenue to the south, and the Perimeter Highway to the west (although the map above shows a slightly smaller area).  The majority of area up of single family residential homes. Crestview is approximately 12 kilometres from the downtown core, and 11 kilometres from the airport. Home ownership in Crestview is relatively high, with a split of 70% of the residences being owner occupied and 30% of the residences being rented.

The area is characterized by modestly-priced homes.  Prices in the area usually start around $180,000 for an attached family home, and closer to $200,000 for a detached family home.  Some larger homes on more substantial lots have sold for just over $400,000. The bulk of the homes were built in the 1960's and 1970's.  There are still some newer construction options (mostly infill lots) in the area.  There are a variety of condominium options in the area ranging from apartment-style units to townhouses.  Pricing for condominiums ranges from $120,000 all the way up to $250,000 depending on the style and square footage of the unit.

Crestview is within the St James School Division Catchment.  The area has an abundance of school offerings, with five elementary schools, two middle schools and one high school.

The Grace Hospital is not considered to be in Crestview however, it is located just beyond the borders of the area at 300 Booth Drive. 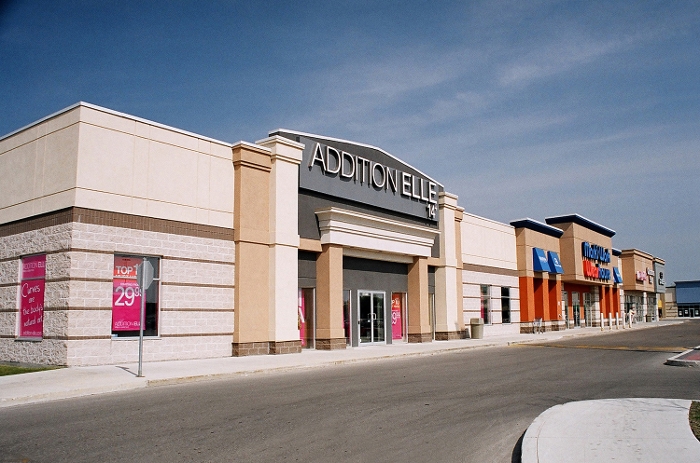 Crestview is fortunate to have the Unicity Smart Complex at its disposal. The complex is located at the former location of the Unicity Mall that was demolished in 2000. The Unicity Smart Complex is home to Walmart, Canadian Tire, Sobey's, Winners, Tim Horton's, KFC, Burger King, Shopper's Drug Mart, Payless Shoes, Winners, The Source, Value Village, Mark's Work Wearhouse, Quizno's and a variety of others. There is also the older Crestview Shopping Center, which has Safeway, a flower shop, credit union, a hair care center, among other offerings.

Just beyond the borders of Tuxedo you will find Polo Park Mall.  This large shopping mall has something for everyone, with over 220 stores, some of the more popular include: The Bay, Canada's largest Forever 21, H&M, The Gap/Gap Kids, Sport Chek, and the Apple Store.

Crestview is also home to a number of parks including Sturgeon Creek Park. The Sturgeon Creek Greenway Trail runs adjacent to Sturgeon Creek from Woodhaven Park to Saskatchewan Avenue. The trail follows the creek which flows through areas that were once tall grass prairie.

Even though Assiniboia Downs Race Track and the Red River Exhibition Park are not considered to be in Crestview it is a great source of entertainment.  It is less than a 5 minute drive on a major thoroughfares.